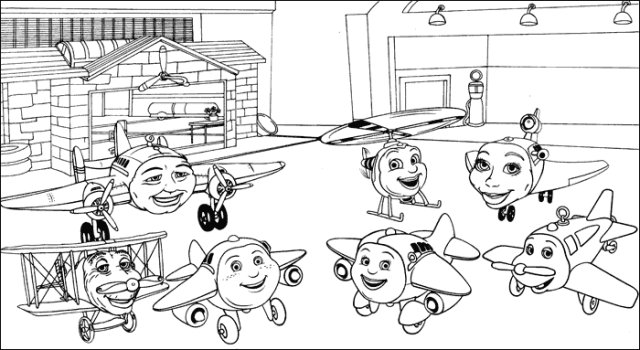 Transportation Secretary Mar Roxas was right when he blamed over the weekend the tight scheduling of airlines as cause for delays in passenger flights currently experienced by NAIA passengers.

Roxas claimed that the normal turnaround time of single aisle jet (A319/320) is one hour but budget airlines squeezes more time to enable it to fly 30 minutes earlier. He said that such tight scheduling doesn’t pose a problem if they are operating in not so busy airport. But operating at NAIA poses a challenge as Cebu Pacific would always find out as most of their turn around flight arrives late affecting the time schedule of subsequent flights.

He further claimed airlines to be booking most flights during peak hours.

The only remedy he said is to reduce flight frequency. But how?

While you are waiting, you can color this…

Philippine Airlines is cool to the proposal. They easily have the capability to upgrade the equipment.

But Zest Airways is not receptive to the idea propounded by DOTC claiming the government has no clue how to enforced flight reduction, and that reducing airlines’ flights would bring about a “grandfather issue.”

“Who among us will reduce flights? If I only mount twice a week flights to a certain route as against the daily flights of a bigger carrier, will both of us reduce the same number of flights?” said Art Alejandrino, a director of ZestAir.

Cebu Pacific who has the most number of flights out of NAIA argued the proposal flawed as it is not feasible on economic grounds.

The airline instead insisted that aviation officials should come up with a well-managed airport slotting, which dictates the specific time an airline is to land and take off from NAIA, to prevent congestion. It also called the attention of DOTC to quickly equip secondary airports around the country with ILS (instrument landing system) equipment to allow them to handle night flights to ease congestion.

Cebu Pacific said this would allow airlines to spread out their flights throughout the day to the airports like Legaspi, Naga, Caticlan, Dumaguete, Butuan among other airport which have multiple flights but whose airport cannot host flights after sunset.

Cebu Pacific further said that government failed to resolved and relocate general aviation traffic sooner despite previous findings that they wasted too much time on approach, landing, and occupancy at the runway creating delay at the airport. General aviation (Genav) was known in the study to account 20 percent to 25 percent of all the takeoff and landing slots at NAIA per day.

The airline further said that NAIA is the only busy airport in Southeast Asia allowing genav airplanes to mix with commercial jetliners.

“The DOTC must have the political will to transfer general aviation out of NAIA. These small aircraft with usually less than five passengers eat up some 17% of total takeoffs and landings. Imagine the benefit to the economy if each of those flights is replaced with 158 or more passenger-configured aircraft. Why remove the bigger contributor to the economy?” Zapanta said.

MIAA previously disclosed that commercial aircraft pays more takeoff and landing fees as compared to small aircraft’s which uses the same amount of time to land or take off at NAIA.

SEAIR further argued that MIAA is supposed to install the satellite-based radar 5 years ago but even bidding for said project has not been started yet.

“Whose to blame for that, airlines too?” laments Zapanta.

NAIA presently handles between 27 and 30 airplanes per hour.

The Communications/Navigation System-Air Traffic Management (CNS/ATM) project designed to reduce separation time to close to 1 minute or around 60 flights per hour has been sent to the back burner for extensive review of contract, having been awarded at the time of the previous administration.

Gutierrez said the radar would be in place some two to three years from now. The CNS/ATM is a satellite-based air traffic control system where approach to airports is guided by satellite and aircraft computers.

In a joint meeting Monday, CAAP, MIAA and CAB issued a joint declaration on how to address NAIA’s congestion problem deciding that the most pressing move to reduce congestion would be to compel domestic airlines to reduce their schedules or scale down the frequency of their flights during peak traffic hours, which are between 7 a.m. and 4 p.m. It was also suggested that airlines devote standby planes to cater for delayed flights as they are already on the ground.

Gutierrez said around 45 takeoffs and landings are scheduled per hour at NAIA, during peak hours, higher than the airport’s ideal capacity of 36 flights per hour.

It was also decided that general aviation and flying school will no longer be accepted and renewed at the country’s premier airport after their contract expires this year. All of them will be relocated to nearby Sangley Airport, which will be redeveloped for general aviation traffic.

The Sydney-based Airport Coordination Australia (ACA) was awarded the handling of airline schedules of NAIA since March, but the three government agencies concerned have yet to complete submission of all airline schedules as of this writing for the summer and winter schedules. ACA allows about 40 to 50 runway occupancies per hour better than CAAP computations.

[Editor’s comment:] At least, they think and talk. But now immediate action is required. Why not doing this: