Dengue ‘code red’ in 5 regions – Caution: Dengue can kill you!

Health Secretary Francisco Duque III has confirmed that “code red” has been raised over several regions around the country due to a surge dengue cases. As of late, the report coming in covering January 1 to July 6 2019, we have five regions — Calabarzon, the Bicol Region, Western Visayas, Eastern Visayas, and the Zamboanga Peninsula are considered under the code red, meaning they have breached the epidemic threshold.” All information and graphics in this articles come from United Nations Office for the Coordination of Humanitarian Affairs.

A lot of questions arise …

Dengue ‘code red’ means that the number of reported cases has exceeded 300 death in 6 months. 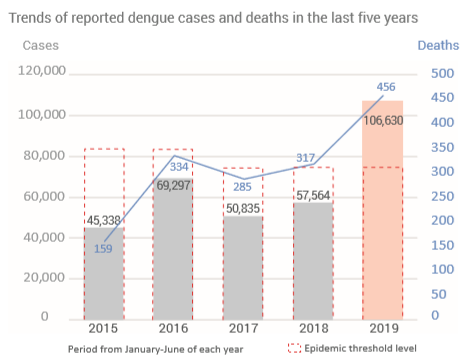 Calabarzon, Bicol – Where is this?

Here in the Philippines we have many geographic and administrative clusters. Even locals do not always understand in which region of the 17 administrative regions they live. And worse, administration creates local clusters like Calabarzon.
Calabarzon is formally known as Southern Tagalog Mainland and designated as Region IV-A. The region comprises five provinces: Cavite, Laguna, Batangas, Rizal, and Quezon, and one highly urbanized city, Lucena.

This is why we prefer to publish a map that shows the number of Dengue cases by colour and the number of death by size of the blue points. 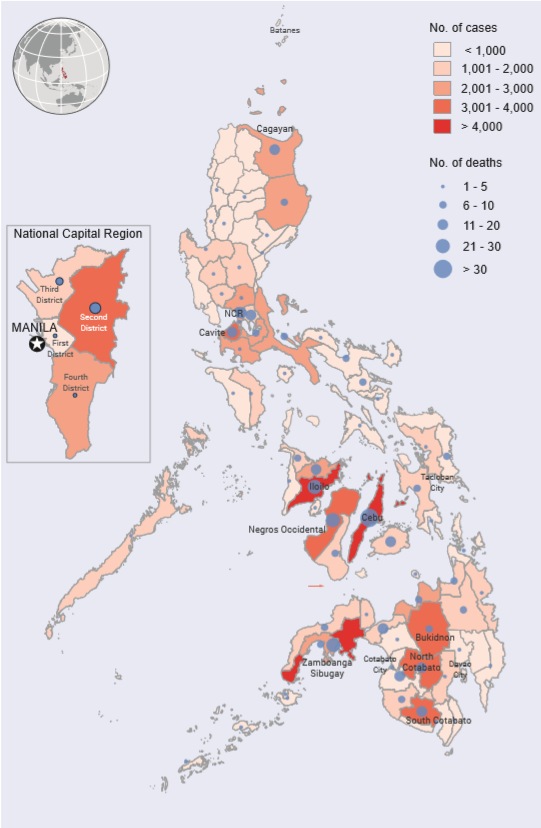 How dangerous is Dengue?

It depends! Females have a slightly higher risk than males 53 to 47 percent. Most fatal cases are among children between 5 and 9 years. Healthy adults living in a clean environment and having access to clean fresh water have a bright chance to survive. Currently the fatality rate is at 0.43%. A bit more than 4 people out of a 1000 infected die.
Last year this rate counted 0.53 to 0.55 percent.

Can I acquire Immunity against Dengue?

Yes you can — but it is very difficult!

Already in my article of February 17 I wrote: Protect Yourself – Nobody Protects You

Take it serious and remember the Aedes aegypti mosquito is day-active. Keep away from mosquito breeding places. I f you have to stay there, like myself, apply a mosquito repellent. The most common product in the Philippines is Off. Myself I prefer Antibrumm because I made the experienced that it protects much longer. You can order it on amazon.com or ask a friend in Europe to send it.

Off contains only 7% of DEET but Antibrumm contains 30%! Officially Off protects you for at least 2 hours. Antibrumm protects you for 6 to 8 hours.
DEET ensures that blood-sucking insects no longer perceive human scents and cannot find humans as their host.

Don’t give this sucker a chance !

For those who want to know more

Here are the two full documents on which I based this article: