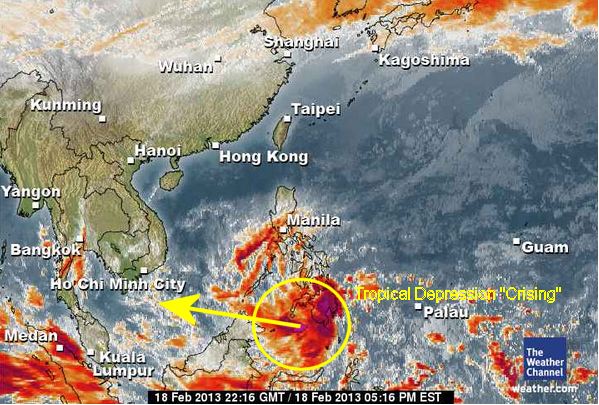 The tropical depression south-east of Mindanao has intensified and accelerated. It was given the name “Crising”. PAGASA put 18 provinces in Mindanao under storm signal 1.

In Camiguin it is raining now for over 30 hours. rainfall is between 5 and 20 millimeters per hour. The highway is flooded near the airport. Several barangay roads look rather like torrents than roads.

Residents living in low lying and mountainous areas under public storm warning signal #1 are alerted against possible flashfloods and landslides.
Estimated rainfall amount is from 5 – 15 mm per hour (moderate – heavy) within the 300 km diameter of the Tropical Depression.
Fishing boats and other small seacrafts are advised not to venture out into the Northern and Eastern seaboards of the country.