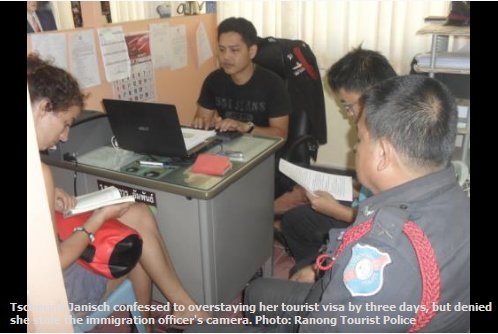 We refer to our message “Tscherina Nora Janisch is missing” from January 16, 2013.

PHUKET: A 22-year-old Swiss student tourist reported missing while on holiday in Thailand has been found alive and well. She’s being detained in Ranong Prisonfor allegedly stealing a camera belonging to an immigration officer.

The search for Tscherina Nora Janisch, a foreign-exchange student studying at the National University of Singapore, began on January 15 when her mother, Elizabeth, posted a concerned note on the popular travel website Travelfish.

Mrs Janisch became worried after she had not heard from Tscherina since December 22. Her daughter habitually contacted home once a week.

The Travelfish posting was quickly carried across many websites and was picked up by mainstream media across the region.

Cpl Rungroj Somjai of the Ranong Tourist Police saw a report in a local newspaper on January 19 and quickly reported to the Swiss Embassy in Bangkok that had seen Tscherina weeks earlier.

“Ranong Tourist Police reported to the Swiss embassy they had found Tscherina. The embassy contacted her family and this morning [January 23] her mother, Mrs Elizabeth Maria Janisch, came to Ranong with Tscherina’s aunt and asked to post bail of 130,000 baht to have Tscherina released,” Cpl Rungroj explained.

The Swiss student is being held on charges of stealing a camera belonging to a Ranong Immigration Officer.

Tscherina presented herself to Ranong Immigration on December 25 while trying to exit the country to do a “visa run” to Myanmar.

She had entered Thailand on December 8 with a tourist visa, which allowed her to stay for 15 days, explained Cpl Rungroj, who was called to aid Ranong Immigration as an interpreter.

“She refused to pay the fine [500 baht per day] for the three-day overstay, so the officer had to charge her. While the officer was typing the arrest record, she asked to go to the toilet,” he said.

“She was charged with overstaying her visa and with theft. She confessed to the overstay, but denied stealing the camera. She was then transferred to Ranong Prison while awaiting her case to be heard in court,” he added.

“I talked with Ms Tscherina’s lawyer today. He told me he has submitted a request to the court to post bail. They are now waiting for the court’s response,” Cpl Rungroj said.

[Editor’s comment:] A really strange story. What is true and what is not true? Why hadn’t the embassy not been informed immediately? Why could the girl not get in contact either with relatives, friends or at least the embassy? What would have happened here in the Philippines?