Fight against Plastic in the Sea is a battle all around the world. Plastics hovering in the water kill thousands of animals in all the seas – every day. This is the story of a man on Camiguin Island. He didn’t want to fight with words, he started to fight with his brain and his hands.

Let him explain his fight

My name is Richard. I am a retired business professional from Olympia, Washington USA, and have been a full time resident of Camiguin Island Philippines since early 2007. I have found a way that keeps most all plastics, trash and even diapers from getting into our oceans.

After researching how other countries handle their solid waste management issues I decided river trash booms are the answer. Many countries are using them in one form or another from tiny bottle filled tubes to massive containment booms with catch basins costing millions of peso. I took what others have done and improved on the design.

I have constructed, installed and improved the design of my budget bottle booms here on Camiguin Island. The amount of plastics and trash they can stop is overwhelming and I could really could use some help. Need to hire personnel, also need funds to build my heavy duty dream booms that can withstand the largest of rainfalls and river flow plus last for decades. Until education can change poor waste management habits turning off the flow of plastics and trash into our oceans I believe is our best and most effective option.

Harvest of one day in only one of the many rivers

Segregate and pack the recovered waste

Richard started his Fight against Plastic in the Sea as a one-man action. He started in the river near his home. This one river barrier he could handle alone. The banks of his river aren’t densely populated. And Richard found an understanding support in the person of his his Balbagon Barangay Captain.

With this motivation, Richard started barrier #2 and #3. These barriers are much nearer to the center of Camiguin’s capital Mambajao. The daily accumulated waste was extremely heavier than the mass in barrier #1. Especially diapers, full of smelly content, could slip under the barrier. Richard then developed a new type of barrier, made of sturdier and heavier plastic.

This very efficient boom became too long and too heavy to handle by one man alone. Richard searched for helpers. On July 12th he wrote: “Came close to installing, but have no support on picking up the trash. I will save this one and take to Bohol to use”. Richard came near to giving up his project to Fight against Plastic in the Sea.

Friends on the Island of Camiguin came to help and to motivate him. Many of them are members of the FB group The Citizens for Green and Peaceful Camiguin. Richard isn’t the guy who gives up easily. After having run against bureaucratic walls he even had the idea to hire inmates of the provincial jail. I don’t know if this idea did bear fruits. When I get an update, I’ll inform you.

People here still act as “Out of my eyes – out of the world”. 30 years ago there had been almost no plastic on the Philippine islands. People used natural baskets and banana leaves to pack food. Beverage was sold in glass bottles. These were filled either in deposit bottles or the bottles were collected by junk shops. The rectangular Gilbey’s bottles were even sold as far as Europe. Artists built their bottle ships inside.

In Camiguin existed a group of  highly motivated artists: The Enigmata Creative Circle. In July 2009 they organized an exhibition/concert against plastic on the site where now stands the Gaisano department store. 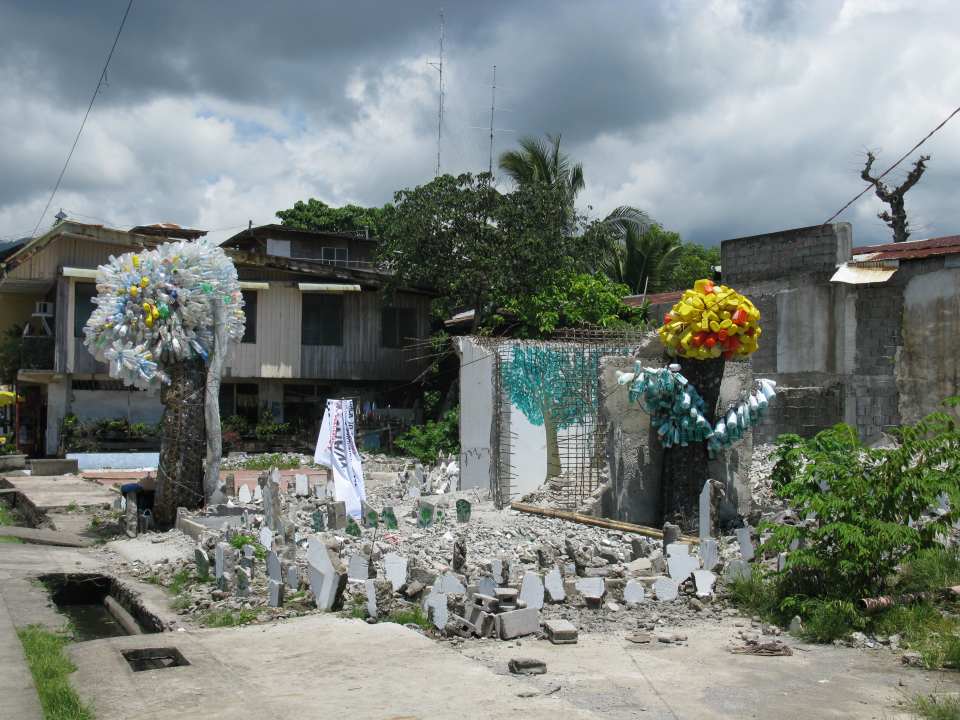 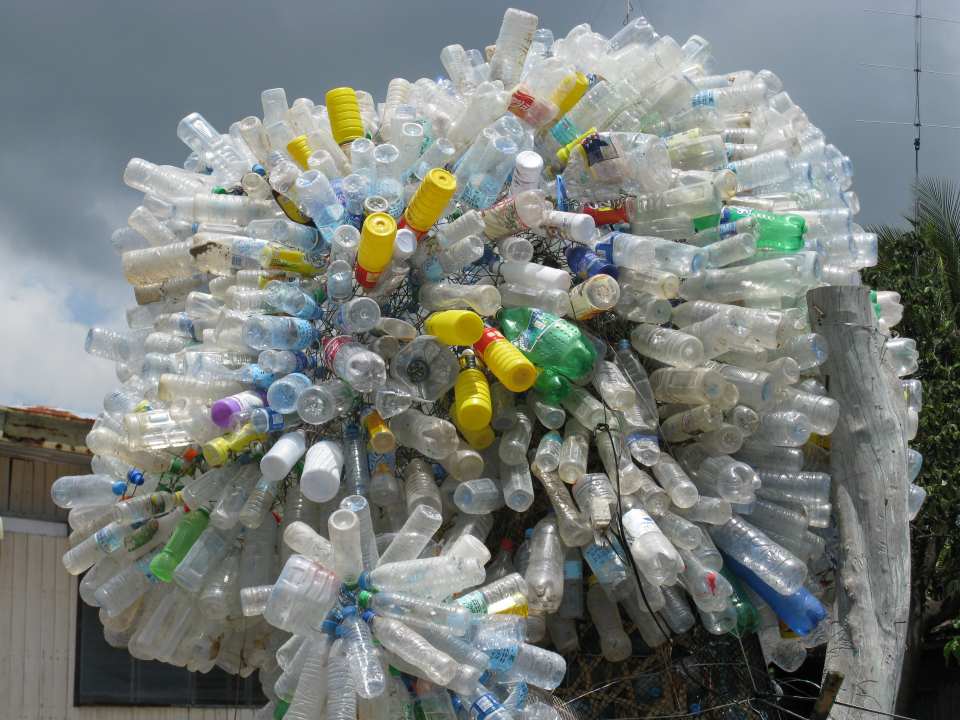 This action had some success as single use plastic bags got forbidden in the shops except for wet goods. Unfortunately this initial efforts didn’t find a follow-up. In 2015 the Treehouse of Enigmata got lost by a fire. But that’s another story.

The very first level would be to abandon the use of plastics as packing material and single use. Sorry, for instance this is dream.

You can help in Fight against Plastic in the Sea

You can help Richard to go on with his third level solution. If he can hire helpers and buy more sophisticated hardware, then plastic won’t pollute anymore our beaches and preserve life in the sea around our island. Richard opened a crowd funding https://gogetfunding.com/saving-our-oceans-from-plastics-and-trash-by-river-bottle-booms