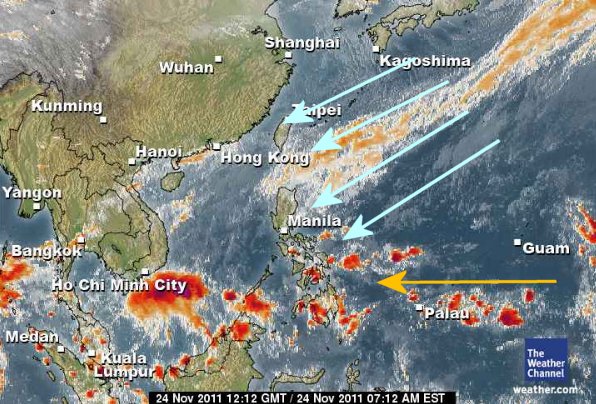 Amihan, the fresh north-east monsoon is now blowing at full strength. Embedded within this strong air-stram is a cold front. This front is marked by the cloud band starting between the Philippines and Taiwan going north-east towards Japan.

This fresh north-eastern wind directly affects Luzon and Bicol (light blue). It marks also the begin of the windsurfing and kiteboarding season in Boracay.

In the southern Visayas and Mindanao, this cold air-stream isn’t so strong. There it meets the warmer and humid north equator stream (orange). This stream is also called “Easterlies”. This humid air cools down and cannot hold anymore all the water. The result is heavy rain. Usually this weather lasts until end of January / begin of February.

Sorry, but this is the wrong moment to visit the southern islands such as Siquijor or Camiguin. Also northern Mindanao from Butuan to Iligan is wet.