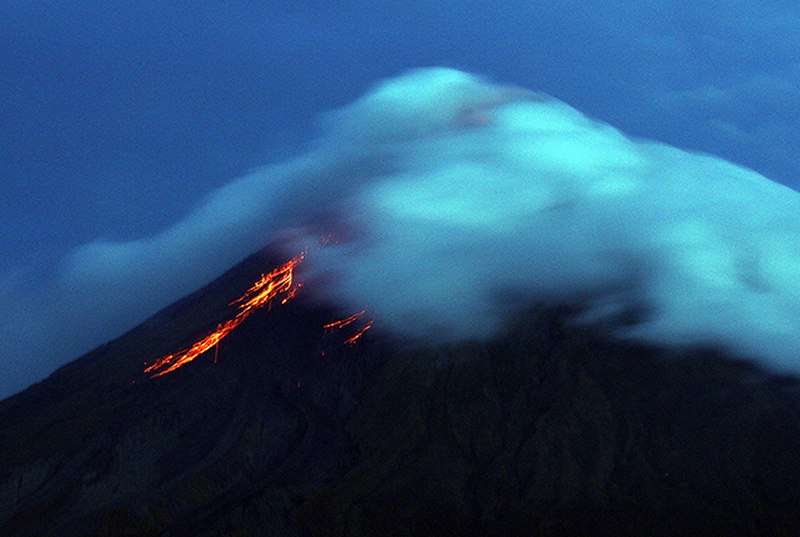 Mayon Volcano’s (13.2500°N, 123.6833°E) seismic network recorded two (2) volcanic earthquakes during the past 24-hour observation period. Moderate emission of white steam plumes drifting west and northwest was observed. Crater glow was not observed last night due to inclement weather. Sulfur dioxide (SO2) flux was measured at an average of 269 tonnes/day on October 17, 2014. Ground deformation data on October 14-16, 2014 showed deflation at the base of the edifice relative to October 4-10, 2014 precise leveling survey although the edifice remains inflated compared to baseline measurements. Tilt data also indicate continuous inflation at the base of the edifice since August 2014. All the above data indicate that the volcano is still in a state of unrest due to the movement of potentially eruptible magma.

Mayon Volcano’s alert status remains at Alert Level 3. This means that magma is at the crater and that hazardous eruption is possible within weeks. It is recommended that the 6-km radius Permanent Danger Zone (PDZ) around the volcano and the 7-km Extended Danger Zone (EDZ) on the southeastern flank be enforced due to the danger of rock falls, landslides and sudden explosions or dome collapse that may generate hazardous volcanic flows. PHIVOLCS maintains close monitoring of Mayon Volcano and any new development will be communicated to all concerned stakeholders.