Pasaway Driver! What do you think? 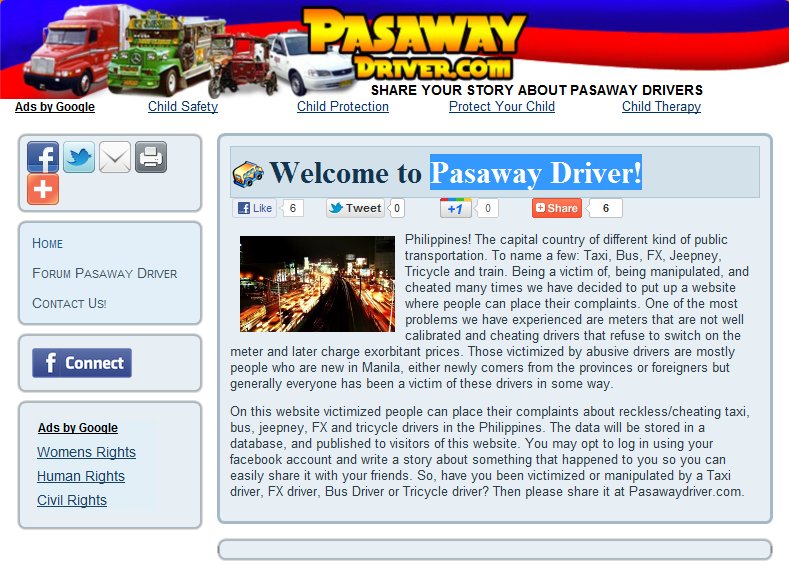 A few weeks ago, a reader of this blog sent us a link to his new website: Pasaway Driver! The initial idea isn’t bad. We all have encountered problems with cheating taxi-, jeepney and tricycle-drivers.

Cheating drivers are a problem for tourism in the Philippines. But where there is no control, the weeds grow. 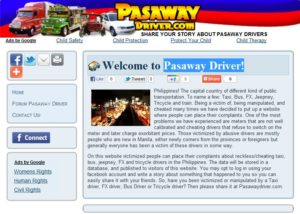 The landing page of pasawaydriver.com

Pasaway is an Ilonggo word that has found its way in the dialects and languages used all over the archipelago because of the media.
It basically means stubborn or hard-headed but it is also used to mean naughty, trouble-maker and anything akin to that.
The root word of pasaway is “saway” which means “(to) reprimand”. So when you say “pasaway” or “salawayon”, it means that the person is consistently doing stuff that will merit him a reprimand.
But “saway” is also a Visayan word which means “comment”. “Pasaway” means to “call for an attention” or “to call for a comment”.

On the one side we agree that it is necessary to get rid of cheating drivers. But on the other hand we can understand the drivers. They earn (without tips) about 250 to 350 pesos per day. The rest of the revenue goes to the owner of the cab. So, is it a good idea to blame the driver publicly?
And what happens with the collected information? The complaints might be used for blackmailing the drivers.