Although we are approaching the month of December it is not yet time go the grey in grey days.  But the ITCZ (Inter Tropical Convergence Zone) already hovers just north of the equator and the sunny days will get sparse. 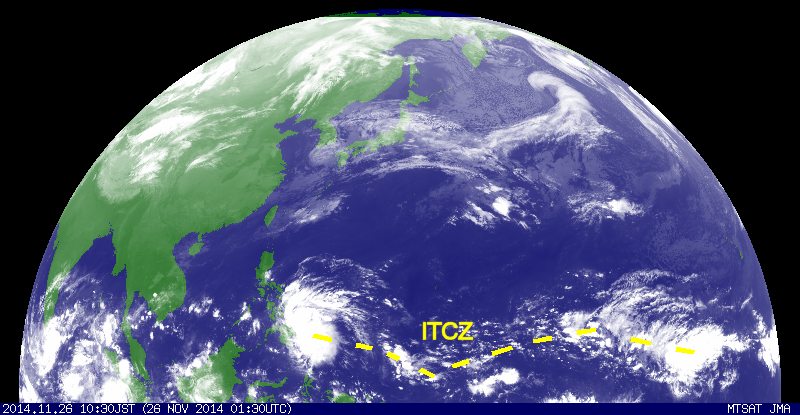 The LPA is well visible as a cloudy whirl south-east of the Philippine islands. The LPA is weak with a pressure of 1006 hPa.

The daily two peaks mark the low tide level. We then are a bit higher over the sea level.

This LPA also brings rain and fresher temperatures to the southern islands. Last night had been down at 26.2°C and now at 10 a.m. we are at 27.1°C. The days before the temperature climbed up to 31.4°C. (All temperature values from our weather station on sea level in Agoho).

The rainy days in Camiguin usually last from begin of December until end of January. Although in the last 3 years we encountered a shift of nearly a month. Grey and rainy weather then started end of December and persisted until end of February.

Observe the weather development in almost real-time. We also plan to put online our weather station in Agoho. Unfortunately we still encounter problems in catching our own weather data. We are not the only ones having this problem with the Oregon Scientific LW301. Here is a discussion about this problem.

We’re in the Philippines – let’s sing and dance