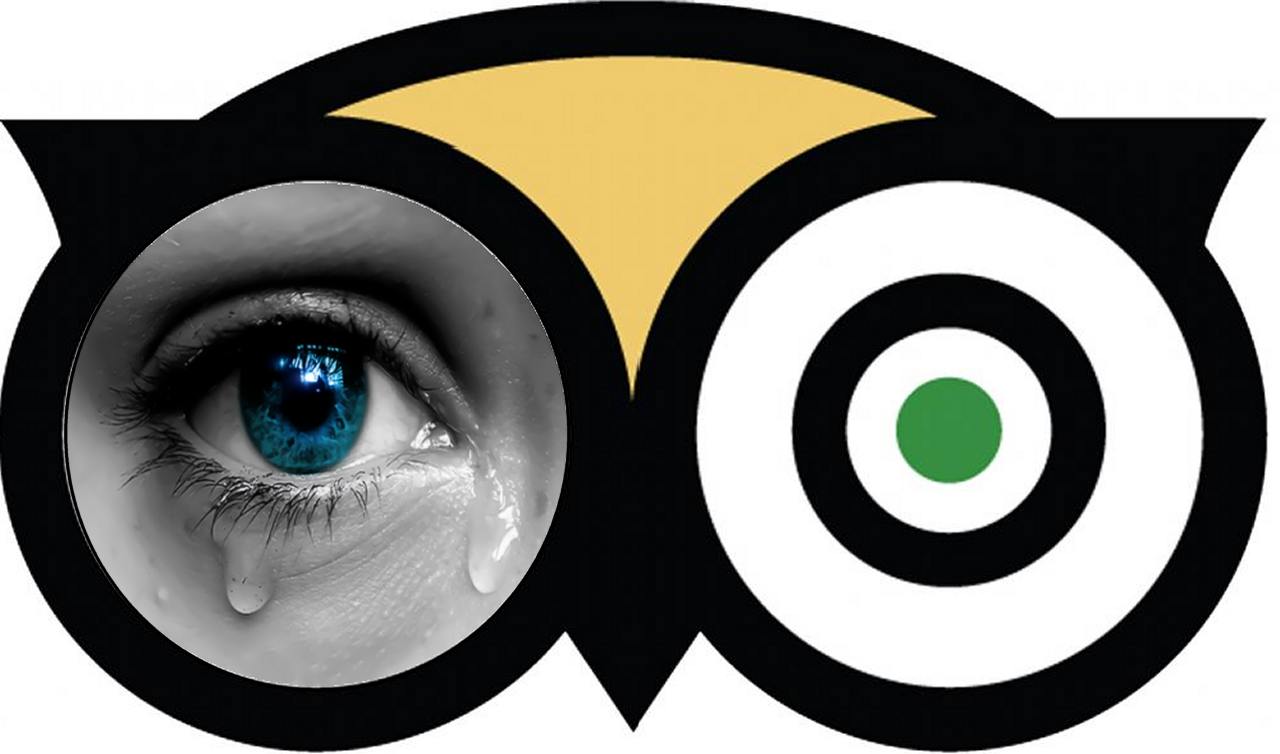 I myself use Tripadvisor when preparing one of our multiple journeys each year. I take the time to read the reviews and I inspect the “Poor” and “Terrible” reviews. We recently had been in Vietnam and Cambodia. The Tripadvisor recommendations made our trip unforgettable – all the hotels, inns and restaurants were absolutely matching our expectations. If you want to have alook at my reviews, go to Tripadvisor and look for “waebi“.

Bad reviews can heavily damage the business of any hotel, resort, inn or restaurant. When I am unhappy, I directly contact the owner or manager on duty. If this isn’t possible, I contact him or her by e-mail or their website’s contact form. And only then, when I do not receive any answer or a rude answer, I publish a negative review on Tripadvisor, Agoda or Venere. Booking.com is too silly, I do not use them anymore. Up to now I had only twice been in the need to publish a really negative evaluation on these public platforms.

Is it a troll or is it an act of vengeance? Any way hit happens and it happens repeatedly. Last Thursday, February 9, 2017, a user calling himself “marlaeschool” and saying to be from Amsterdam, Holland, did post a series of 5 reviews on Camiguin’s restaurants. 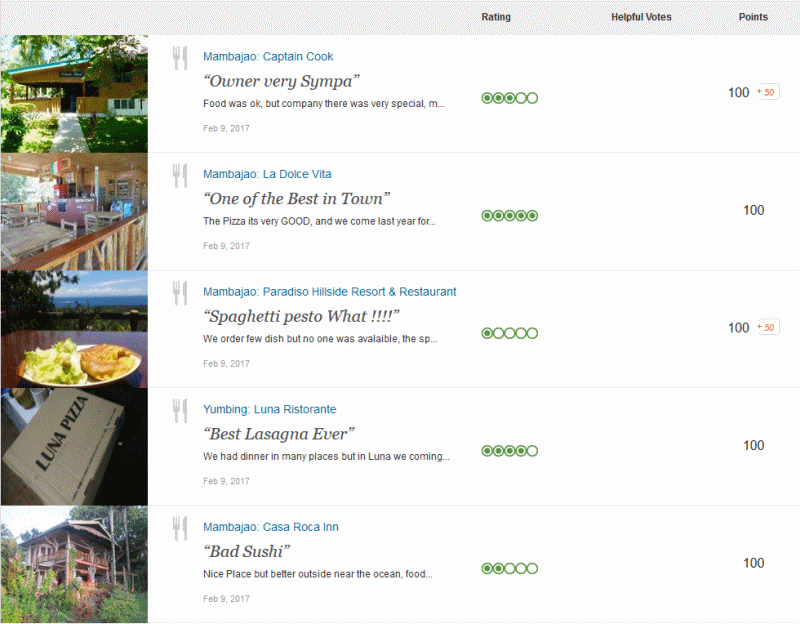 Two of these reviews are poor to terrible. Are they true? NO! They aren’t true. I know both restaurants. I frequently eat there and in the case of Casa Roca, I am eating there for now many years at least twice a month. In all these years, I’ve never seen Sushi in this restaurant. When fresh fish is available, one can get Sashimi, but never Sushi. For what belongs to the Paradiso Hillside, I know the owner and manager for now more than 8 years. It had started with the Pizzeria in Agoho, continued with the La Luna in Yumbing and is now the Hillside Resort and Restaurant. Eight years is a long time for accurate memories, but I cannot remember having ever eaten any pasta al pesto in any of the 3 restaurants under direction of Vincenzo.

So, what is happening in Camiguin?

The strange the Tripadvisor account “marlaeschool” had been created on February 9, 2017. The only reviews of this user are the five above. I bet it’s a local person of Camiguin island. Knowing many Dutch people, I had always been surprised by their excellent English knowledge and by their spotless typography. User “marlaeschool” has typos in all reviews, also in the positive ones. If you check the name “marlaeschool” on Google, you get 4 of the above Tripadvisor reviews as result. Not one line more.

Unfortunately Tripadvisor has sometimes a short memory. Mine lasts a longer time. 3 years ago, a similar campaign had been started against almost the same restaurants. I d0n’t remember the user’s name. But I remember the style. Similar typos, similar wrong accusations. Is it a coincidence?

In April 2015, a dear friend and dentist on Boracay island got attacked on Tripadvisor by a troll. The attack had been very nasty and implicated completely wrong medical errors. After multiple interventions from satisfied customers, Tripadvisor removed this thread.

When reviewing on Tripadvisor, you must check a box confirming that the review is your own work and that you’re not related to the reviewed establishment. They also write that they have a zero tolerance policy on fake reviews.

I understand that Tripadvisor cannot review all the Thousands of reviews posted every day. I therefore suggest that Tripadvisor requires photo proof of any review of grade “Poor” and “Terrible”. Short: No photo – no review!
If you do not understand, check here: Italiannis-restaurant-cagayan-de-oro-oh-no

Tripadvisor must fight these Trolls and these Mafiosi.

All these rating platforms and Wikipedia are abused. Even “Google maps” serves the trolls for misinformation. The Hillside Resort and Restaurant on Camiguin Island had repeatedly been misplaced on Google maps. 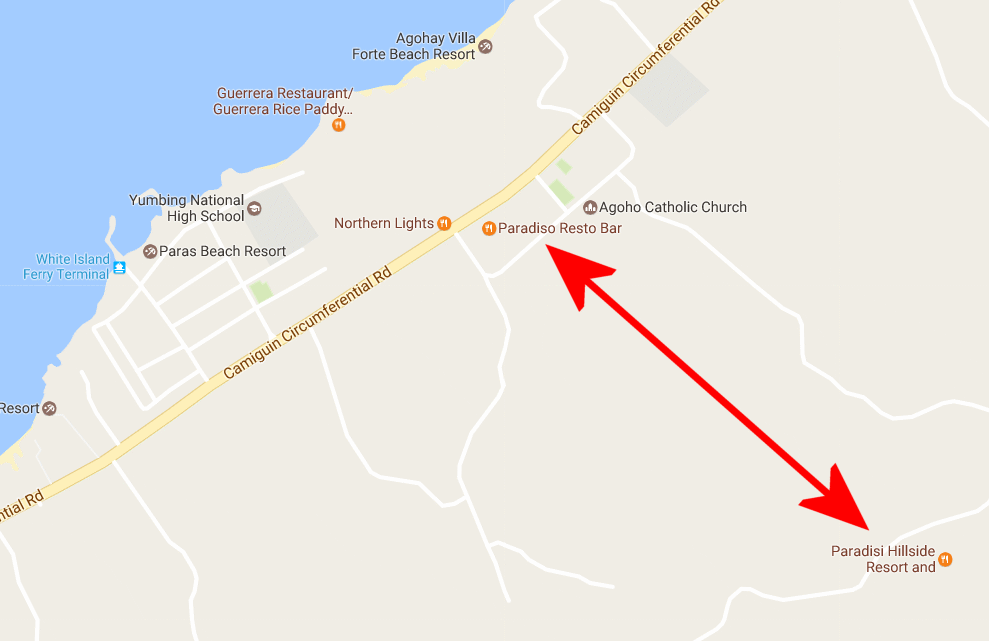 This case is a bit different. After having talked to the Google maps team, I see a problem with the “Intellectual Property Protection” in the Philippines. If the name of your company is not a registered trademark, your neighbor can give his new establishment exactly the same name. The Philippine Trademark laws are more complicated than elsewhere in the world. The tariffs are increasing every year! If you like to inquire have a look at Intellectual Properties Office of the Philippines. The tariffs can be downloaded here: http://www.ipophil.gov.ph/images/2016WhatsNew/Announcement/MemoCircular16-012s2016.pdf

[Editor’s comment:] All these Social Media platforms do have one goal: Make money – a lot of money. Facebook and Instagram have problems with tits and hate. Google fights again SEO pirates. Twitter has follower problems with Mr. Trump. Tripadvisor, Agoda, Venere and Booking.com are abused by Trolls and Mafiosi. To get a first impression, they are still OK, but if you need to trust, you’re advised to switch on your own brain. Do it, Do it now.