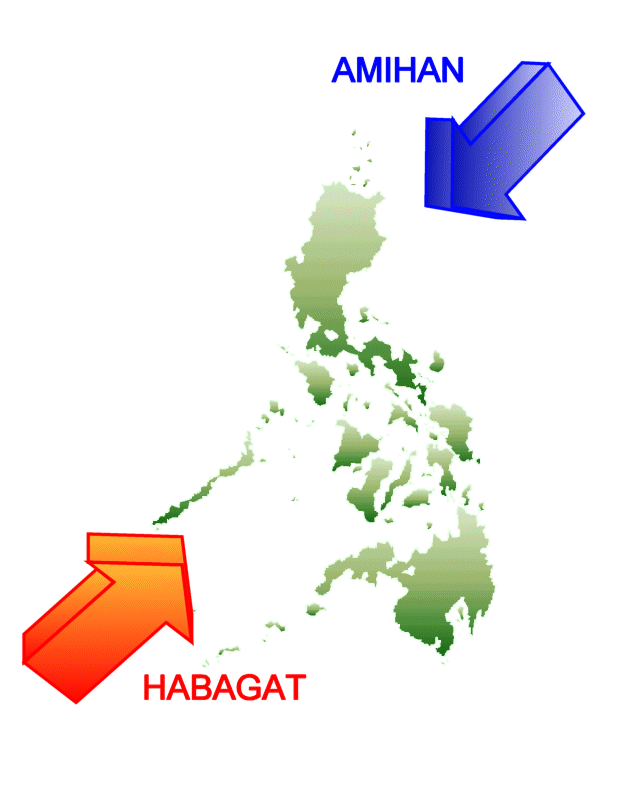 Before Tropical Storm YAGI / Dante had passed by, out in the Philippine Sea, we had the situation of “father of all winds”.

There had been no Amihan anymore and the winds blew from all directions or there had been no wind at all. Now the usual Habagat season has begun. A steady gentle wind is blowing from south-east.

AMIHAN season:
Fresh and dry continental air flows from north-east (China) to the northern islands of the Philippines.
In Luzon it is dry and rather fresh. Up in the cordilleras it can even get icy cold. It is also called the dry season. This is only true for the north.
The southern islands are in the moist air stream coming from east, from the equatorial Pacific. This air stream is also called “Easterlies”. They bring humid air to Mindanao and the south-eastern Visayas. Rainy season there is in December and January (and sometimes February).

The Amihan season lasts usually from begin of December to end of May.

HABAGAT season:
Wet and warm air flows from the south western seas towards the Philippines. In Luzon it is the wet season with lots of rain. In the Visayas and Mindanao it is rather dry. Only the west and southwest slopes of the mountains encounter strong rains. It is also the season of the typhoons and local thunder storms.
Peak months for typhoons are July, August and September.

The Habagat season lasts usually from begin of June to November.