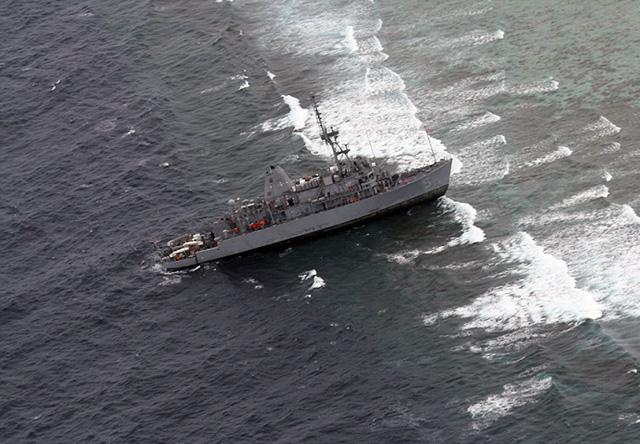 Damage to the fragile corals of the section of the Tubbataha Reef where the United States Navy minesweeper USS Guardian ran aground Thursday has worsened with two-thirds of the 68-meter long ship sitting on the protected marine area, the World Wide Fund for Nature (WWF) said late Friday.

The Tubbataha Reef is the largest marine protected area  in the Philippines with a size of 97,030 hectares. Over 1000 species live in the reef; many are already considered as endangered. Animal species found include manta rays, lionfish, sea turtles, clownfish, and sharks. Vivid corals cover more than two-thirds of the area and the waters around the reef are places of refuge for numerous marine lives.

It is strange that a modern US Navy ship enters a protected area without clearance and runs aground. Didn’t they use GPS and other electronic devices to navigate? And even stranger, another US Navy ship that came to the aid of the USS Guardian by offloading nearly all of the crew went in and out of the Tubbataha Protected Area without park clearance.

The ship, actually a mine sweeper, is mostly made of wood for not to trigger mines with magnetic sensors. The big danger is fuel.  The ship just refueled in Subic Bay before sailing towards Palawan. Even a very thin fuel-layer on the water surface could damage corals miles away from the damaged ship.

We hope that they can get the ship off the reef without damaging the corals further more.  The full extent of any damage to the reef won’t be determined until the ship is recovered.