Camiguin Tourism depends completely on airlines and maritime transportation. Without them, Camiguin remains a completely hidden pearl in the southern Bohol Sea.

Camiguin Tourism is going up and down like a cork in the waves. Unlike the waves in the sea, it is not weather or nature that force Camiguin’s ups and downs, it’s human creativity and incompetency.

Camiguin’s tourism entirely depends on transportation capacity and frequency. Two main routes link the pearl in the southern Bohol Sea with the rest of the world. In the south there are links to northern Mindanao, Balingoan and Cagayan de Oro. In the north are the connections with Bohol and Cebu, islands of the southern central Visayas.

These vital links are helplessly exposed to airlines and shipping companies. The recent six years show this economic maelstrom.

Conclusion: No potential tourist can rely on transportation to Camiguin. All northern routes are down, except the Cebu Pacific Air flights. Foreign embassies warn their citizens not to go to Mindanao, the southern route. How can a potential tourist reach Camiguin? 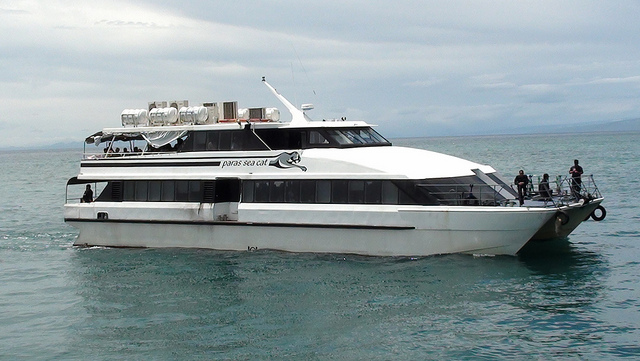 The good old days of the Paras Sea Cat

Tourism promotion in Camiguin also sees its ups and downs. Already in 2009 a private resort could reserve and get the valuable domain camiguin.ph. This domain is still active and perfectly maintained. But it promotes one resort and not the whole island destination of Camiguin.

From 2008 to 2011 the Camiguin Tourism Association (CTA) had a rather nice website. Real efforts were made to promote Camiguin and tourism in Camiguin:

You may want to see an archive copy of this website. Here it is!

In 2012  somebody created a new website for the CTA. Unfortunately their webmaster did not respect copyrights and used pictures from other websites. The website is dead since end of 2013. This domain name (CAMIGUINTOURISMASSOCIATION.COM) without content is available for sale by its owner through Sedo’s Domain Marketplace. The estimated sales price is USD 925 (or much cheaper…) Something went awfully wrong with CTA – the Camiguin Tourism Association. What happened?

The official governmental website of Camiguin has one page with title TOURISM. With 9 dry lines, not updated since May 2011, they cannot expect any potential tourist to be attracted to Camiguin. Camiguin is not alone, check a similar island’s official website: Siquijor! Lorem ipsum – hahaha!

The two Facebook pages, one official and one private, are no real promotion. Facebook can be used as booster for existing and well designed websites. Facebook as a standalone solution has no impact.

Conclusion: Camiguin has currently no, absolutely no promotional presence on the World Wide Web. Either the government or a private entity must create and maintain a highly professional website that makes the world talk about Camiguin. A first step had been done with last year’s outstanding promotion video. Camiguin needs tourism professionals to do the right job!

Camiguin promotion during WTM 2014 in London

Raphael Cohen,  once told me, back in my Geneva days: Don’t forget to be prepared otherwise you can prepare to be forgotten! So true, also for Camiguin.

Camiguin must absolutely not become a second Boracay or a second Langkawi. Camiguin must continue to be a wonderful pearl in the Bohol Sea.  We should not look for mass tourism but attract tourists who look for unspoiled tropical nature, clean but not overcrowded beaches, adventures without big technical gimmicks and most important, find the true Philippines. Camiguin has them all but does neither actively maintain nor promote.

The yearly two peaks, Panaad and Lanzones Festival, must not be over-promoted. The two events are nice, but these 17 days out of 365 stress the island. 10,000 arrivals in one or two days are a catastrophe.  These events could be used as magnets for whole spring and autumn seasons, but not as singular peaks in a tourism desert.

It is never too late. Let us face the challenge together – NOW! The feedback form below could be the starting point. We could together use this feedback form as a first forum of opinions, ideas and critics. If the comments and suggestions grow and will have enough impact, we could start to think about a forum or even a revived Camiguin Tourism Association.  The door is open for a new Camiguin Tourism: Camiguin Tourism – New Impulses Needed – Now!