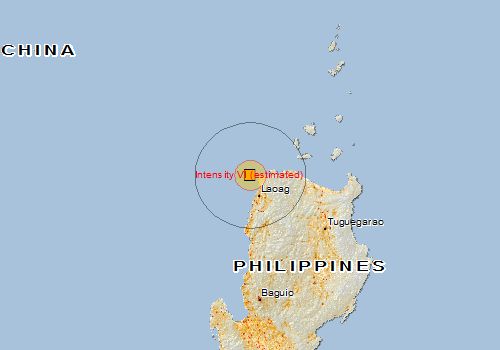 This earthquake is expected to have a medium humanitarian impact based on themagnitude and the affected population and their vulnerability.

Whether international humanitarian aid is needed must be decided by an expert.

The earthquake happened off shore, near Philippines, Region of Ilocos (population 3,551,000). The distance to the nearest coast is 16km. The nearest places are Bojeador C (17km).

The following vulnerable infrastructure is nearby and may be affected. The nearest protected areas are Ilocos Notre Metropolitan (24km), and Tanap (24km).

For logistics, the following access points are nearby. The nearest airports are Laoag International (runway 7900ft, 42km), and Taggat (66km). The nearest ports are Dirique Inlet (18km), and Laoag (40km).

The maximum altitude nearby is 2200m. The area has steep slopes (up to 30 percent) and may be susceptible to landslides.

The approximate distance within which light damage may occur is 28km (equivalent to Modified Mercalli Index IV).