Today weather had been sunny again. The air was extremely humid. Davao is the second largest city of the Philippines after Metro Manila. Actually, I like to discover cities by foot.  In Manila, you can stroll around in Intramuros and Fort Santiago, in Cebu you can also see a lot between the Magellan Cross and Fort San Pedro. But in Davao? Davao City is a car city. If you want to see something, you have to drive many, many kilometers. A real old town does not exist.

We decided therefore to go to the Philippine Eagle Centre and the Malagos Garden Resort, which we had missed the previous day due to extremely heavy rain. Both are approximately 500 meters apart on the same street in Calinan. The distance from the center of Davao is approximately 35 km! 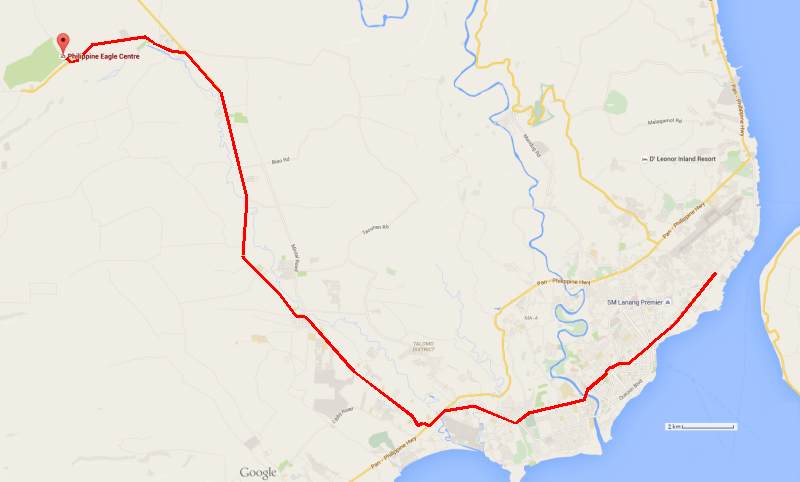 The PEC is actually a park in the park. First you enter the Davao Water District (5 Pisos only, sir). The Davao Water District is an area of several square-kilometers, where the main water sources of the city are located. The forested park is criss-crossed by streams and channels. Here is the link to the website of the Philippine Eagle Centre. 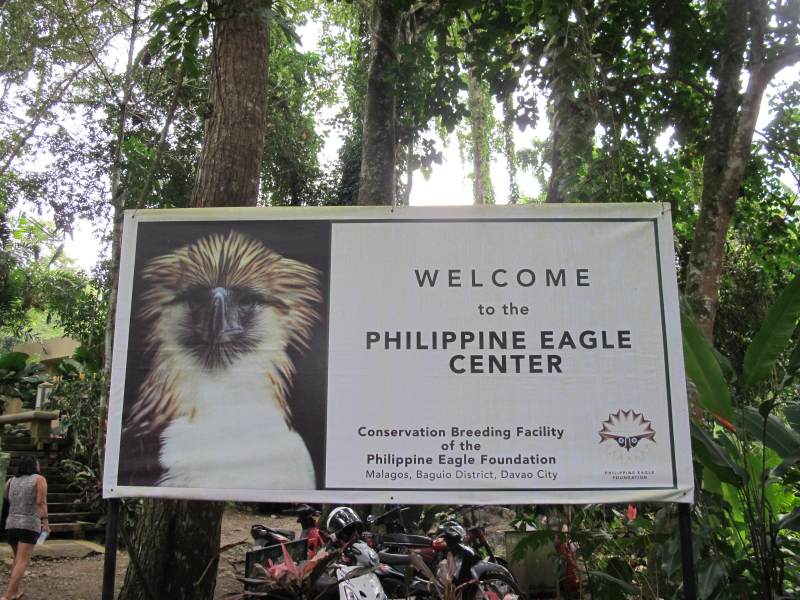 At the very entrance of the PEC again 50 pesos are due. 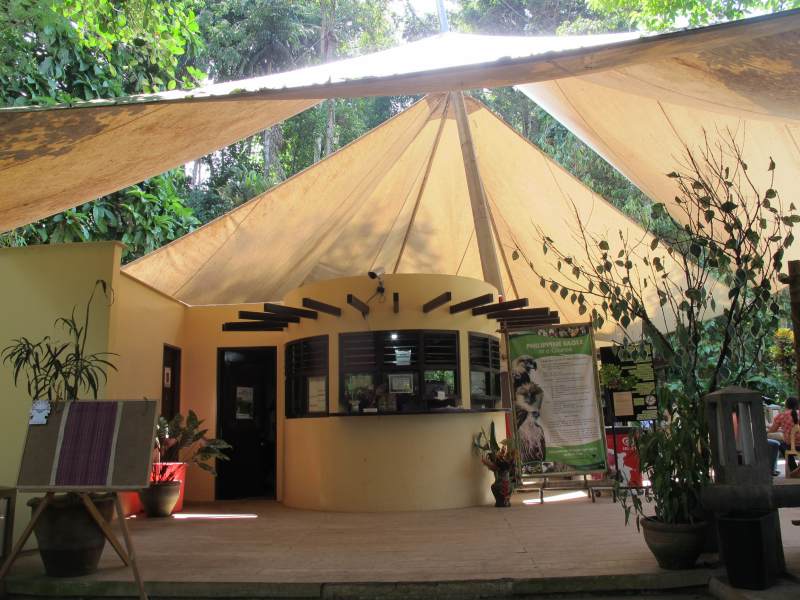 The entrance looks quite appealing with its two sail-roofs, which hang on one intentionally leaning mast.
As it is so with female navigators – pee first – we were looking for the comfort room. The ladies toilet was barricaded. So I had to exchange my driver’s cap for my bodyguard equipment and defended the entrance to the men’s CR heroically against other visitors. Inside, it was not exactly luxurious but also because: 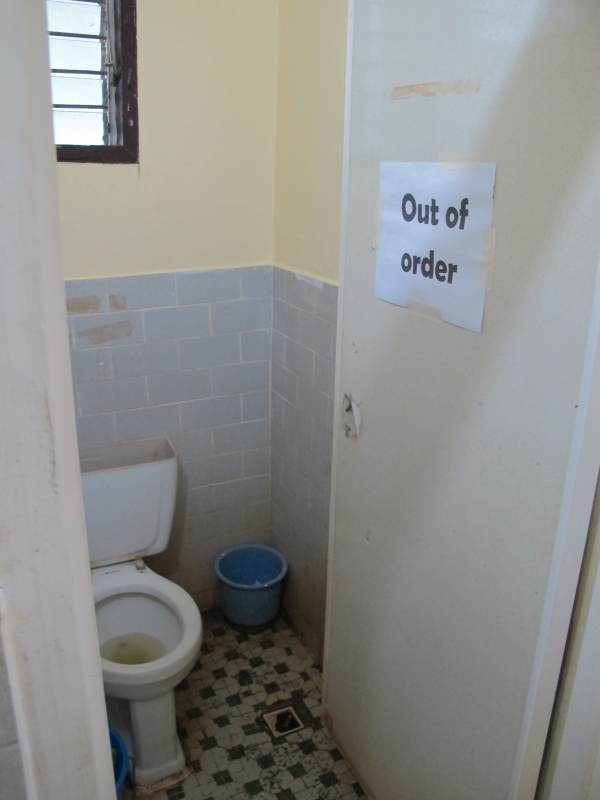 The maintenance consisted once again in an “Out of Order” of paper.

But then we finally went to the birds … 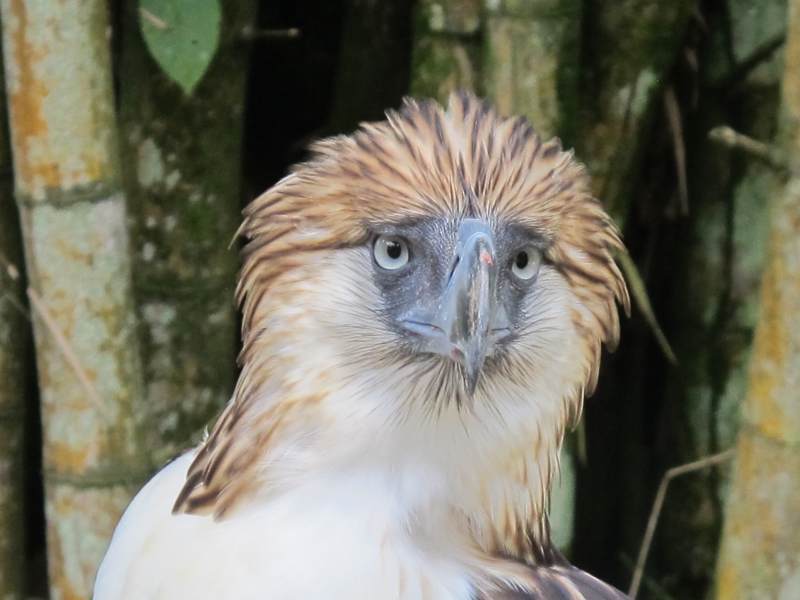 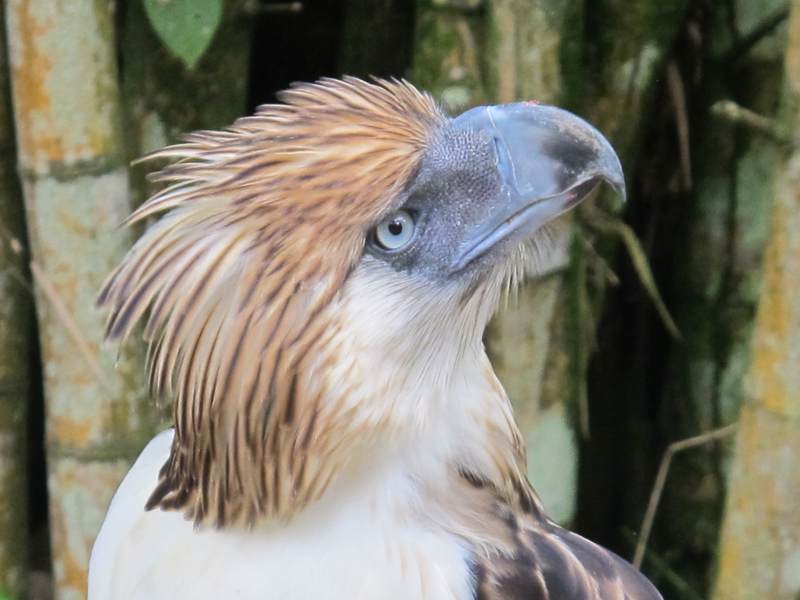 All the animals here in the park have been born in captivity. They are raised here and later brought back to wild nature as a young adult. The Philippine eagle is, however, still red-flagged. 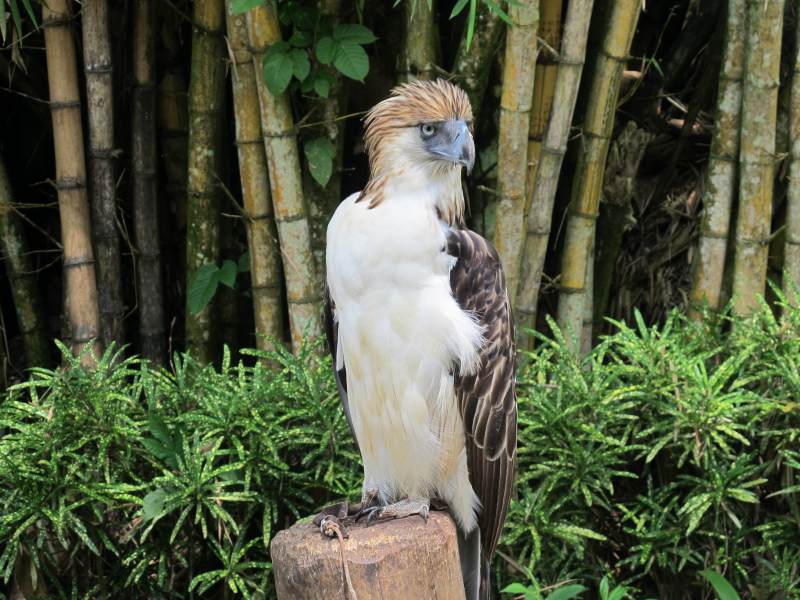 The adult animal has a height of about one meter, but is a lightweight with only about 8kg.

It is interesting to meet the local caretakers to ask questions and to listen to their detailed responses. For example the aviary pictured below was built specifically to bring males and females together. It may need up to 2 years until the two come together and mate. Sometimes it doesn’t happen at all. But when it happens, they seem to be loyal for a lifetime. Only every second year a single egg is laid. 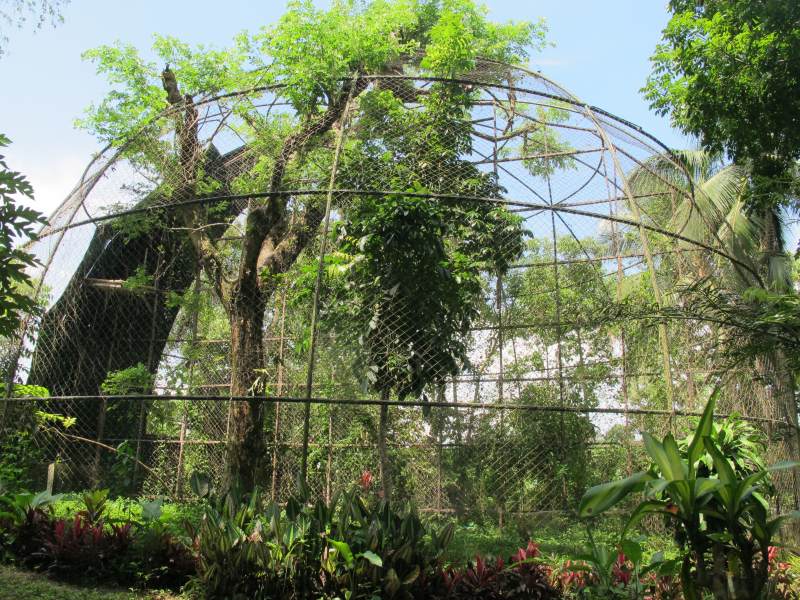 Hatching takes about 2 months. The cub leaves the nest for the first time after more than five months. It remains up to 18 months together with the parent animals.

A caretaker looks after only one or two birds. “Our” caretaker then led us through the park and showed and explained many different birds of prey. One of the Philippines Eagles does not like this caretaker. As soon as the man falls below a certain distance to the enclosure, the eagle starts to threaten him.

In the morning, most of the birds can be found at their feeding ground in the park. In the afternoon, they are then returned to their free flight enclosure. So you should be rather early in the park, then you shoot such images: 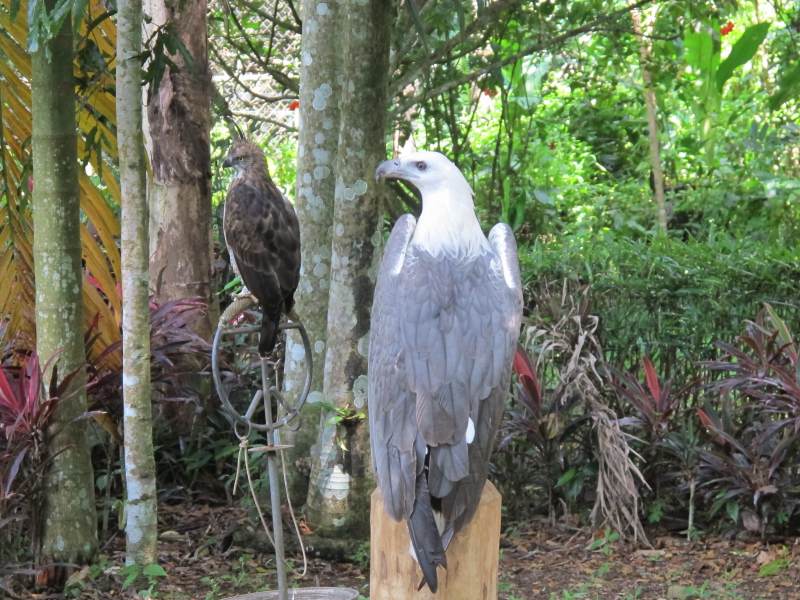 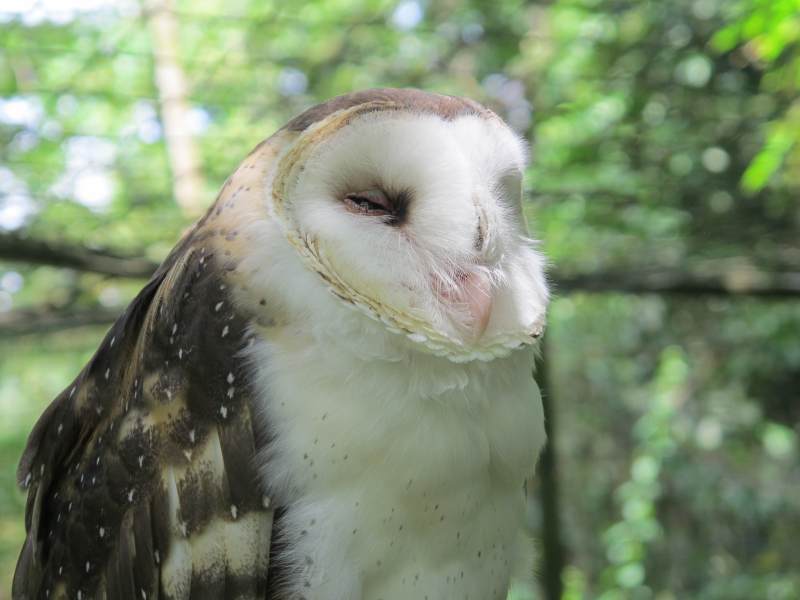 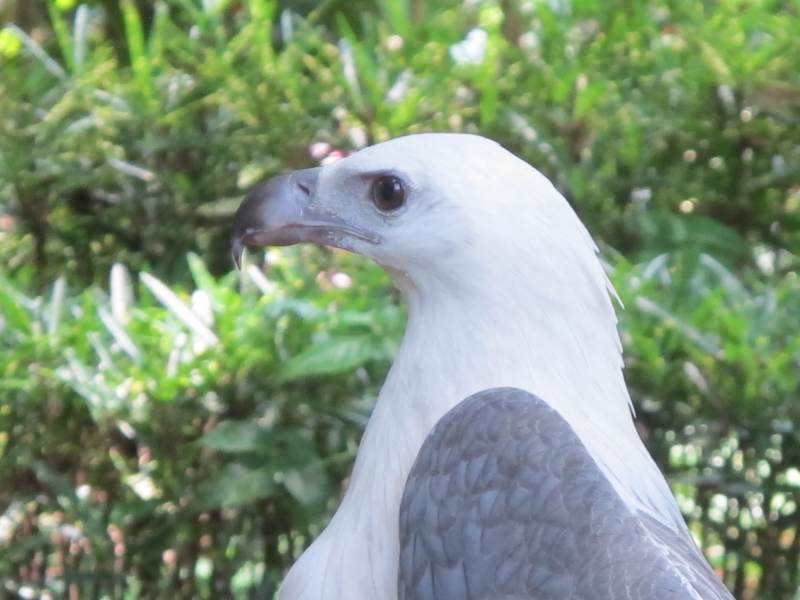 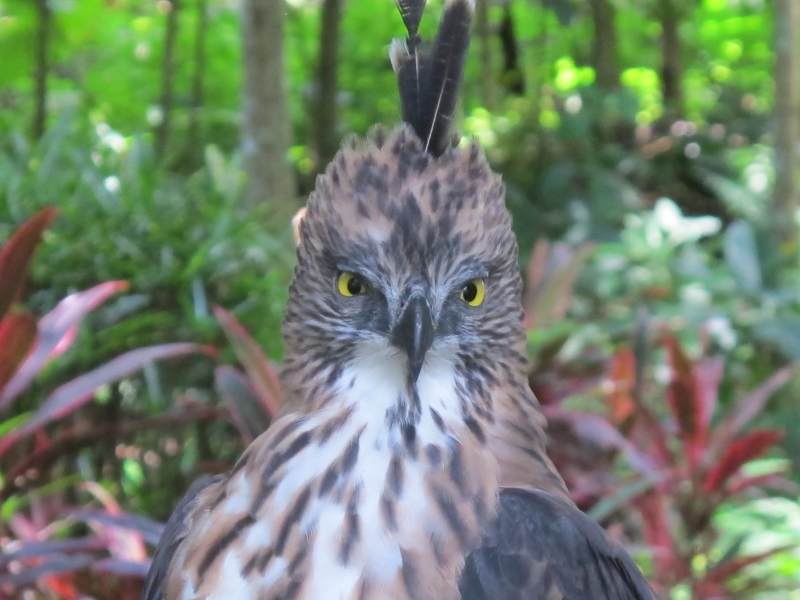 For nature lovers and amateur photographers, this tour is highly recommended. If you find the right caretaker, then 2-3 hours pass extremely fast.

Food – Pinoy Style snacks and eatery pots can be found in the inner and outer parks. We did not visit the outer park, the “Davao Water District”, but will do it next time. For lunch we drove to Malagos Garden Resort.

This resort is located approximately 500m before the Philippine Eagle Centre, thus we were already on the way back. The Entrance Fee is 100 pesos. The staff at the entrance was in a daydream state.
You can stay at this resort from 350 pesos in Dormitory. Those who want a bit more privacy, have to pay 2,400-4,200 pesos. Here is the website of Malagos Garden Resort. We can imagine that families with children could spend one or two days and nights here. We were the only visitors in the park, possibly in the whole resort. Peak tourist season is December to early January.

The sleepy girl at the entrance had handed me a guide: 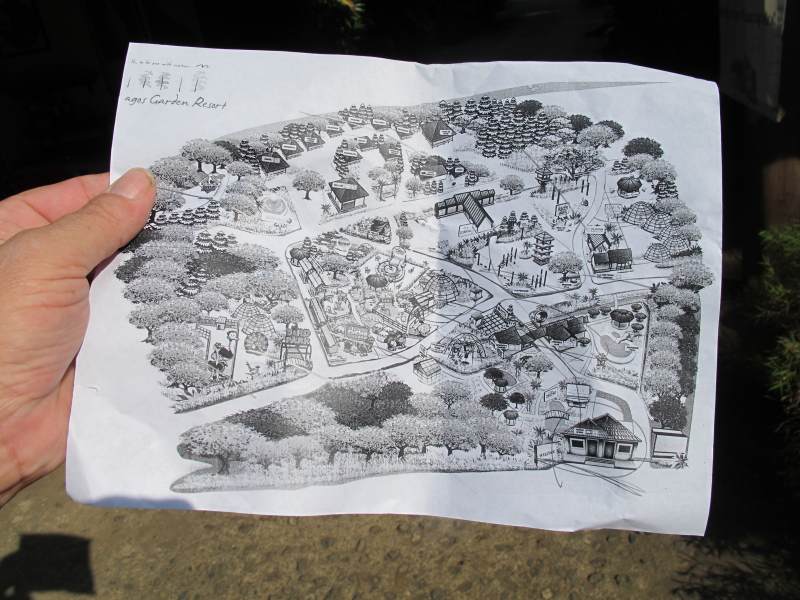 The park is large and for lovers of exotic plants, it is worthwhile to stroll through the well maintained park. For children there are plenty of entertaining devices. The park is largely designed as a petting zoo.

In addition ponies, guinea pigs, goats, ducks and chickens and ostriches we also found some interesting birds. Below are two impressions: 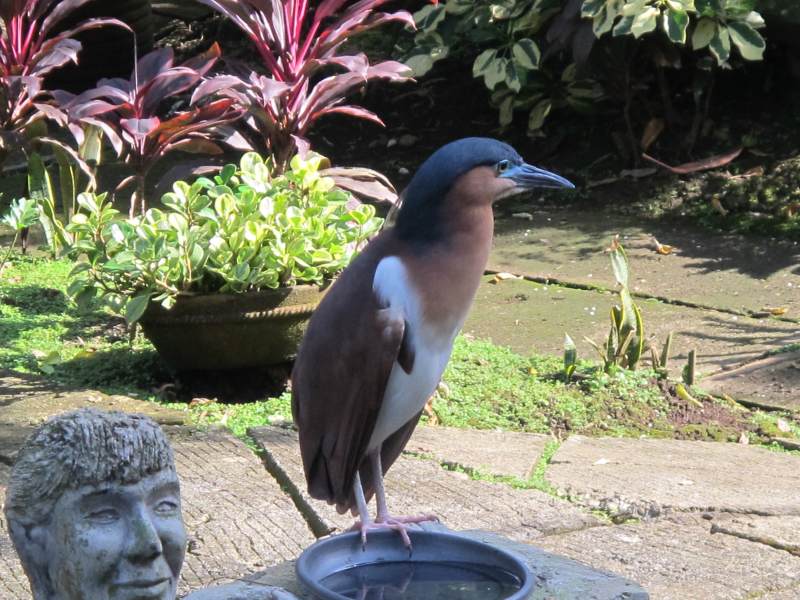 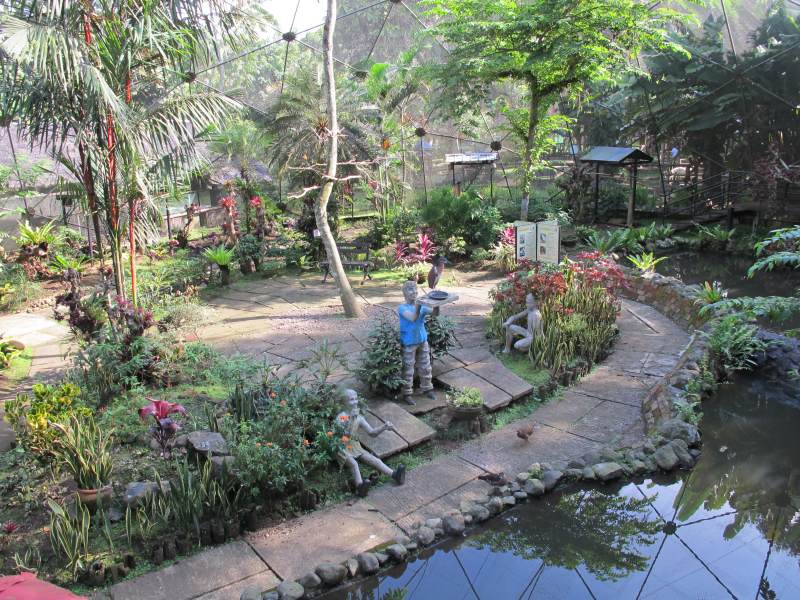 After about an hour we had seen about everything of interest. Since our stomachs started growling, we tested the restaurant. The menu card looked good and we also got what we ordered. Unfortunately I can not remember what we had eaten. That says quite clearly that it was neither good nor bad but simply average.

After a tormented way back we spent the evening at the Waterfront Island Hotel. We decided to get away from the cardboard pizza and went to try the seafood restaurant in the garden.
Staff was again perfectly trained and very friendly and entertaining. The food could not convince us again. About the wine prices, I had blasphemed yesterday.

During the meal, we decided to leave Davao next day. A worthwhile stay in Davao requires more preparation! Our mistake. As we later learned from friends, we would be better have stayed at the Marco Polo Hotel. Next time, maybe.

Summary of the 4th day: