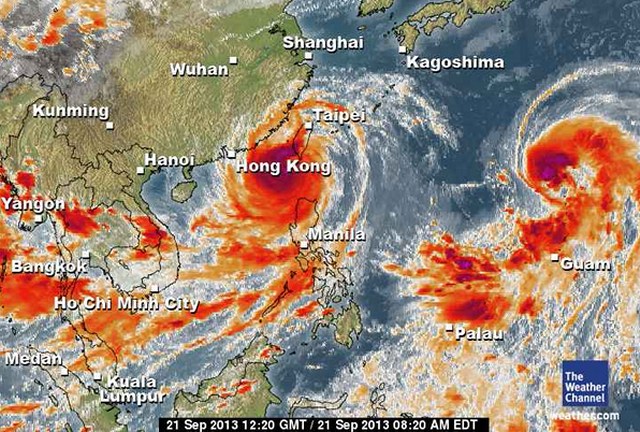 Typhoon USAGI / Odette is still inside PAR (Philippines Area of Responsibility) but is now moving at 19 km/h towards Hongkong. The typhoon battered the Batanes Island group in the far north of the Philippines overnight before flooding a Taiwanese village.

From Hongkong a friend informed us that they have the highest Storm SIgnal #10 and that flights in and out the airport are cancelled. Ships are not allowed to leave Honkong’s ports.

The National Disaster Risk Reduction and Management Center said the storm dumped up to 20 millimeters of rain an hour over a diameter of 800 kilometers on the country’s main Luzon island. Several roads and bridges were rendered impassable by overflowing rivers or landslides, it said.
Typhoon USAGI / Odette made landfall on Itbayat, the Philippine island closest to Taiwan, toppling communication and power lines, uprooting trees, causing landslides and flooding rice and garlic farms.

A flash flood occurred and trees were uprooted from the mountain and swept by roiling waters to the town. Many houses lost their roofs or were destroyed. Damage to crops is heavy and landslides were reported all around.

The Tropical Storm 1320 (JPA name) has intensified and is moving north towards Japan. There is nearly no risk that this storm reaches the Philippines. But its suction could again amplify south-west monsoon (Habagat).

We also keep an eye on this storm. For more and real-time information see here:
Old Weather Page