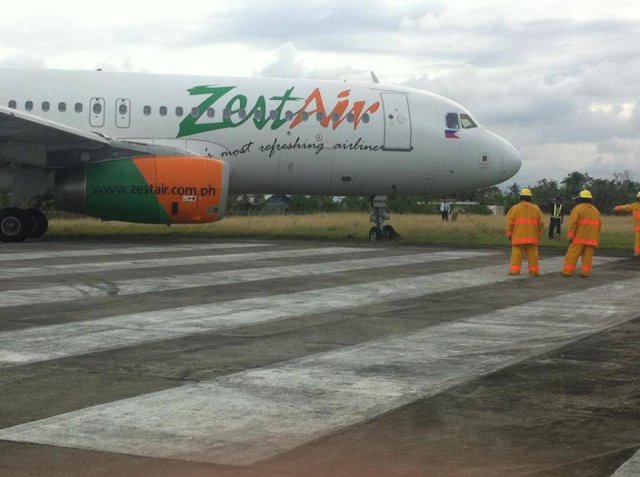 The pilot of the Zest Air flight Z2 058 bound for Busan in South Korea reportedly miscalculated the runway during a turn prior to take-off and its front tire rolled into soft ground.

The plane has already been removed from soft ground but was still on the runway of the airport, as of posting.

All 150 passengers and crew are safe.

Eric Apolonio, public information officer of CAAP, said the Kalibo airport will be temporarily closed due to the incident.

It will resume operations at 6 p.m. today, he said.

Authorities said Zest Air will send a rescue flight for the stranded passengers.

Meanwhile, four flights to Kalibo have been cancelled: 2 flights of Seair, and 1 flight of Cebu Pacific, and 1 AirPhil Express.

[Editor’s comment:] When will CAAP finally ground Z(P)est Air definitely? The management of this Air Line is unable to guarantee the safety of their passengers and crews. Management? Who is directing this company’s airborne business?