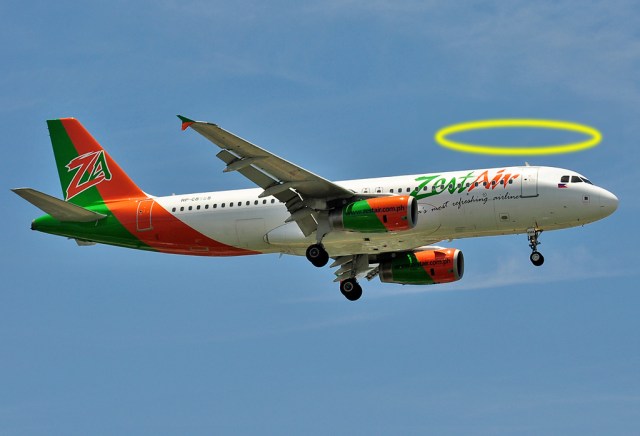 While surfing in the Philippines’ airlines waves we found “Saint Zest”!

2Z also known as Zest Air or Pest Air had been grounded Friday by the Civil Aviation Authority of the Philippines (CAAP). CAAP listed several reasons for their decision:

Only one of these reasons would have been enough to ground the airline!
And since yesterday one can read on the Zest Air website: 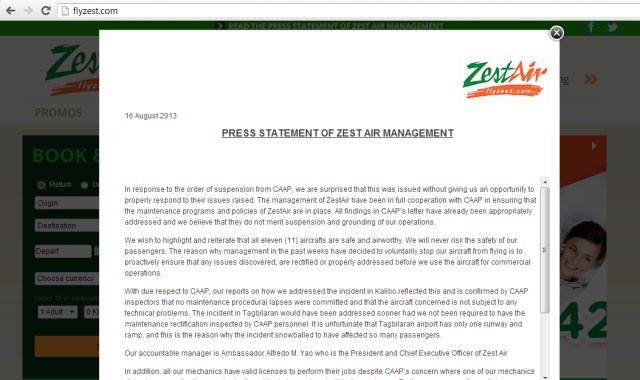 In response to the order of suspension from CAAP, we are surprised that this was issued without giving us an opportunity to properly respond to their issues raised. The management of ZestAir have been in full cooperation with CAAP in ensuring that the maintenance programs and policies of ZestAir are in place. All findings in CAAP’s letter have already been appropriately addressed and we believe that they do not merit suspension and grounding of our operations.

[Editor’s comment:] That’s nearly true. Since Zest Air had been under “increased surveillance” already years ago, they should have known that CAAP keeps a close look on them. What Zest Air did not improve during these long time, they would not have been able to improve immediately after a warning.

We wish to highlight and reiterate that all eleven (11) aircrafts are safe and airworthy. We will never risk the safety of our passengers. The reason why management in the past weeks have decided to voluntarily stop our aircraft from flying is to proactively ensure that any issues discovered, are rectified or properly addressed before we use the aircraft for commercial operations.

With due respect to CAAP, our reports on how we addressed the incident in Kalibo reflected this and is confirmed by CAAP inspectors that no maintenance procedural lapses were committed and that the aircraft concerned is not subject to any technical problems. The incident in Tagbilaran would have been addressed sooner had we not been required to have the maintenance rectification inspected by CAAP personnel. It is unfortunate that Tagbilaran airport has only one runway and ramp, and this is the reason why the incident snowballed to have affected so many passengers.

[Editor’s comment:] This one I had to re-read at least 3 times to understand. Incident – incident and then unfortunately. They are real Saints at Zest Air. They so much like the conditional form, they should have known that they fly in the Philippines, where only 6 airports have separate taxiways and only 3 have more than one runways. Maybe zest should fly elsewhere.

If you are a bad driver, don’t blame the roads for your accident. Do not drive!

Our accountable manager is Ambassador Alfredo M. Yao who is the President and Chief Executive Officer of Zest Air

In addition, all our mechanics have valid licenses to perform their jobs despite CAAP’s concern where one of our mechanics did not possess the license physically on him but was stored within the work area. Furthermore, none of our pilots or crew are exceeding their duty time limitations.

[Editor’s comment:] This would be simple to prove. Publish all the certificates and licences! And please publish the flight-books (log-books) of your crews, so anybody can verify what you write.

ZestAir will be submitting a copy of the comprehensive improvement program that is currently being implemented in ZestAir to provide our passengers an improved experience, product and services. We have been investing significantly in our operations and fleet to further raise the standards of excellence across all aspects of personnel, parts, and maintenance/technical services.

[Editor’s comment:] This is a very good idea. But until the whole program is implemented, verified and accepted passengers are safer, when your birds stay on ground.

And there is another candidate for sainthood: 2P also known as PALexpress (Airphil Express). I know from inside CAAP, that they had had also a close look also on this sinner. But some management movements inside CAAP made this close look shortsighted …