Cyclone KOPPU/Lando had been and still is full of surprises. First the good news – the storm is continuously weakening and it still stays off the coasts of northern Luzon. There are still strong winds over northern Luzon, but rainfall has much decreased.

Already before having made landfall near Baler, Aurora, all meteorological agencies predicted that the cyclone will almost immediately move north crossing straight over de Cordillera.  But KOPPU/Lando crossed over central Luzon, weakened to a Cat.2 Typhoon and went out in the sea near San Fernando, La Union. During all day yesterday, forecasters expected the storm coming back over Luzon. But the cyclone moved alongside northern Luzon’s west coast.

A second surprise has been the forward speed. All agencies expected the storm to move very slowly at some 3 to 10 km/h. Fortunately Cyclone KOPPU/Lando accelerated  and moved at 15 to 20 km/h. Satellite photos also showed that the strongest rainfalls happened over the sea. Update 12:45 p.m. The storm has again slowed down and is almost stationary!

The 3rd positive surprise are the rainfalls. Initially Cyclone KOPPU/Lando poured big masses of waters over Aurora and Nueva Ecija. But as soon as storm moved out to the sea in the west (that’s diplomatically correct) the main rainfall happened over the open sea.

DOST’s Project Noah has been and still is a big help in evaluating rainfall. The Doppler Radars provided almost real-time rainfall maps. The Baler station was damaged or cut from the network as early as 11:30 p.m. on October 17. But Aparri, Subic  and Tagaytay stations continued to provide us with extremely valuable information. Have a look into Project Noah, it is a state of the art tool but simple to handle. This mornings observation show only scattered and very light rainfall over the Mountain Province. 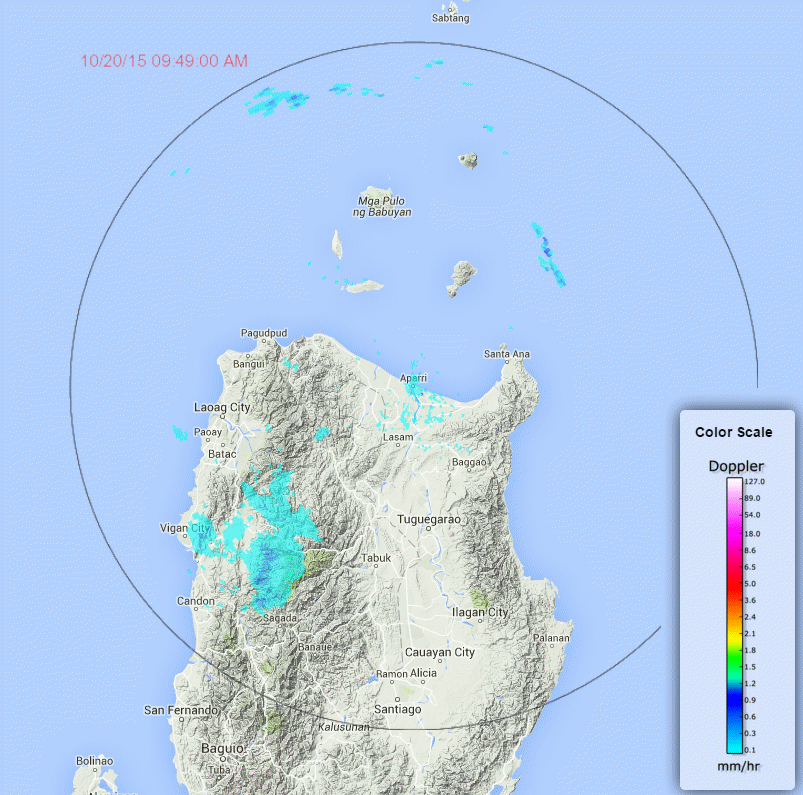 This seems to be our last report on this storm if there are no more surprises!