A strong earthquake of magnitude 5.9 shook Samar yestarday evening at 8:55 PM. The earthquake was felt with intensity V in the surrounding towns of Hernani, Salcedo, Borongan and Guiuan in eastern Samar.

The quake was also felt with intensity IV in the rest of Samar and in Leyte.

Intensity V (strong) means:
Generally felt by most people indoors and outdoors. Many sleeping people awakened. Some are frightened, some run outdoors. Strong shaking and rocking are felt throughout the building.
Hanging objects swing violently. Dining utensils clatter and clink; someone are broken. Small, light and unstable objects may fall or overturn. Liquids spill from filled open containers. Standing vehicles rock noticeably.
Shaking of leaves and twigs of trees is noticeable. 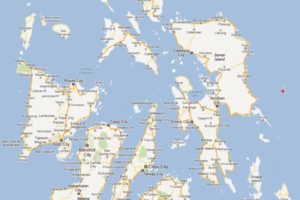 26 aftershocks had been recorded since yesterday night, but these were generally not felt. At least one magnitude 3.7-aftershock was recorded at 3:40 AM today but there was no damage or aftershock expected from the pre-dawn quake. Its epicenter was located at 49 km northeast of Mercedes, Eastern Samar.

The magnitude-5.9 quake which jolted parts of Eastern Samar Tuesday night came less than three hours after a magnitude-5.1 quake hit the Davao area in Mindanao.