To bridge or not to bridge … 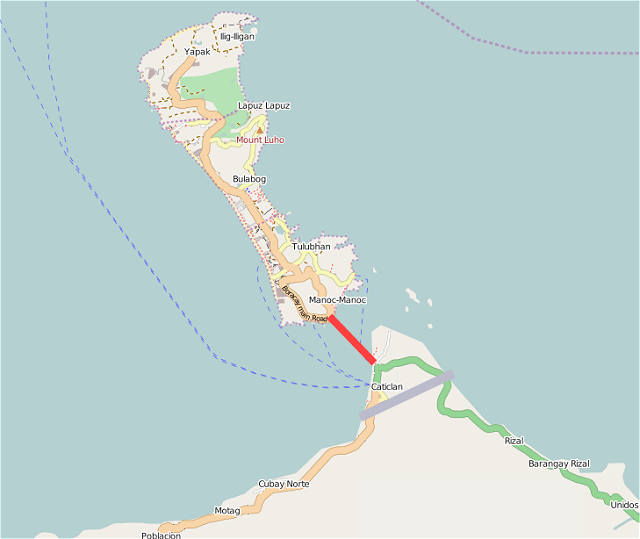 A year ago the whispers about a bridge from Malay (northern Panay) to Boracay island started to filter into the press.

On May 2, 2013, the Philstar wrote: The local government of Malay, to which the world famous resort Boracay Island belongs, is considering building a bridge between Boracay and Malay. Later, in November 2013, the BracaySun wrote: Boracay Bridge Construction for 2014 – Officials of the Malay Municipal Government appear hell bent on implementing the proposed bridge “priority project” (said do be between Tabon Port and Tambisaan Port) on Boracay.

On Tuesday this week the Aklan Forum titled: MoA for Boracay-Malay bridge feasibility study under scrutiny
The agreement to conduct a feasibility study for the proposed Boracay-Malay bridge is pending in the Sangguniang Bayan (SB) of Malay. According to SB secretary Corcordia Alcantara, the memorandum of agreement between Malay town mayor John Yap and contractor Daewoo Engineering and Construction Company was referred to Committee on Laws chaired by SB member Rowen Aguirre. The committee will deliberate the agreement after the attendance of legislative council members at Philippine Councilors League (PCL) congress slated this week from March 5 to 7 in SM Mall of Asia in Pasay City, she added.

– Tourists can transfer between Caticlan and Boracay in any weather – no more motion sickness or interrupted service because of high waves
– Transfer time between Kalibo or Caticlan to Boracay is reduced by nearly 1 hour.
– Water and Power supply lines could be incorporated in the bridge structure instead of laying on the sea ground

– The island of Boracay already suffers “overload” during peak-seasons
– Loss of livelihood of hundredths of boatmen who bring tourists to and from Boracay
– The main-road in the center of the island is congested from early morning to late night. New roads will have to be built.
– Where do they park thousands of cars and buses on the island?

[Editor’s comment:] Seems to be again one of the Philippines’ famous “White Elephant” projects. Nice to have without thinking about risks, secondary effects and maintenance. Boracay is already the most squeezed lemon in the Philippines. Press beyond the last drop and you will taste the bitter inside of the seeds.