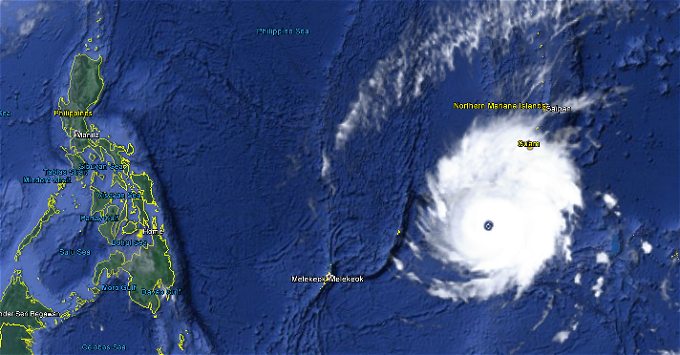 Typhoon MAYSAK is now Category 4 Cyclone. The storm is still heading straight west at 20 km/h. It got much stronger during the last 12 hours and has now a central pressure down to 930 hPa.

The powerful tropical cyclone MAYSAK has been rapidly gaining strength while moving over the warm waters of the Western Pacific Ocean. This storm poses a threat to the Philippines this weekend. Now at Near-Super Typhoon strength, MAYSAK continues to move between Guam and Palau. Forecast predict the storm to enter the Philippine Area of Responsibility (PAR) by early Thursday morning (April 02).

MAYSAK will reach Super Typhoon status within the next 12 to 24 hours, before it starts its weakening trend through 48 hours. From Wednesday to Friday the storm should continuously get weaker and reach the Philippines Saturday or Sunday as Category 1 Typhoon. The area of landfall will be somewhere between Bicol in the south and Aurora in the north.

Next update this evening